Zanzibar is warm almost all the year round with heavy rains from March to May and lesser rains during October and November. February is the hottest month with a maximum average temperature of 29 degrees Celsius, while in August the temperature falls to 21 degrees Celsius.

The city of Zanzibar consists of two distinct areas – Stone Town and Ngambo. In Stone Town shadows play with shafts of sunlight. Here and there, one will catch a glimpse of ornate latticework on a balcony or admire the intricacy of a carved door in sun warmed wood. 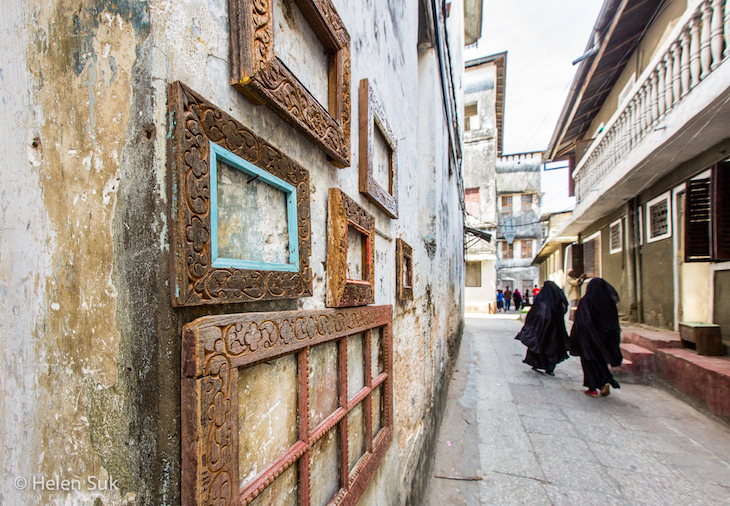 It may not have a particularly romantic name, but Stone Town is the old city and cultural heart of Zanzibar, little changed in the last 200 years. It is a place of winding alleys, bustling bazaars, mosques and grand Arab houses whose original owners vied with each other over the extravagance of their dwellings. This one-up man-ship is particularly reflected in the brass-studded, carved, wooden doors – there are more than 500 different examples of this hand-work. You can spend many idle hours and days just wandering through the fascinating labyrinth of narrow streets and alleyways.

Stone Town was recently and deservedly declared a World Heritage Site by UNESCO. Most of the houses that can be seen today were built in the 19th century when Zanzibar was one of the most important trading centers in the Indian Ocean region.

The Coraline rock of Zanzibar was a good building material, but it is also easily eroded. This is evident by the large number of houses that are in a bad state of repair. Several buildings have already been renovated and the Stone Town Conservation Authority has been established to co-ordinate the restoration of the town to its original magnificence. Pictured opposite is a ‘before and after’ look at the restoration work done on the Old Dispensary. As a result of sensible policy, nearly all of the major hotels built in Stone Town are housed in renovated buildings.

Hotels in Stone Town include the Zanzibar Serena Inn ,Tembo House Hotel and Dhow Palace Hotel and Hotel International. As you walk through the town, please remember that Stone Town is very much a real community, where real people live and work. It is not a museum piece or theme park created for tourists, and sensitivity should be shown to the local people. If you want to learn more about Stone Town, there are various ways to do it. You can either wander through the narrow streets by yourself armed with a map, or you can embark on a tour.

For centuries the Arabs sailed with the Monsoon winds from Oman to trade primarily in ivory, slaves and spices. The two main islands, Unguja (normally known as Zanzibar Island) and Pemba, provided an ideal base for the Omani Arabs, being relatively small, and therefore fairly easy to defend. From here it was possible for them to control 1,000 miles of the mainland coast from present day Mozambique to Somalia. Indeed, in 1832, Sultan Seyid Said, of the Busaid Dynasty that had emerged in Oman, moved his Sultanate from Muscat, which was perhaps more difficult to protect, to Zanzibar where he and his descendants ruled for over 130 years. Most of the wealth lay in the hands of the Arab community, who were the main landowners, kept themselves to themselves, and generally did not intermarry with the Africans.

This was not true of the Shirazi Persians who came from the Middle East to settle on the East African coast. The story goes that in AD 975, Abi Ben Sultan Hasan of Shiraz in Persia (now Iran) had a terrible nightmare in which a rat devoured the foundations of his house. He took this as an omen that his community was to be devastated. Others in the Shiraz Court ridiculed the notion, but Sultan Hasan, his family and some followers obviously took it very seriously because they decided to migrate. They set out in seven dhows into the Indian Ocean but were caught in a huge storm and separated. Thus, landfalls were made at seven different places along the East African coast, one of which was Zanzibar, and settlements began. Widespread intermarriage between Shiraz and Africans gave rise to a coastal community with distinctive features, and a language derived in part from Arabic, which became known as Swahili. The name Swahili comes from the Arab word sawahil which means ‘coast’. The Zanzibar descendants of this group were not greatly involved in the lucrative slave, spice and ivory trades. Instead, they immersed themselves mainly in agriculture and fishing. Those Shiras that did not intermarry retained their identity as a separate group.

A narrow staircase winds its way into a cool interior, children’s voices echo in a hidden courtyard, old men chat next to the colored, crumbling stone walls and tantalizing scents of spices wreathe doorways and dark corners. A walk through the narrow, twisting streets of stone town plunges you into the past. The houses are over 150 years old and are constructed from the island’s coral stone. Built by Arab and Indian merchants, in the 19th century, this is the only functioning historical city in East Africa.

A spice tour is a specialty of Zanzibar and involves a walk in the western and central regions of the island through plantations, private gardens and forests. There are more than 50 different spices and fruit – cinnamon, pepper, ginger, tamarind, coffee, ylang-ylang, coco, and sugarcane. Coconuts are another main produce of the archipelago.